Okinawa Tour: Awamori Cave Expedition with Regional Okinawan Cuisine
Japan Guide Junko • Okinawa
"Descend down into the world’s only awamori cave, delving into the rich culture of Okinawa’s favorite distilled alcohol and tasting regional delicacies during this Okinawa tour."
Hidden deep in a limestone cave in Kin Town is an awamori cellar where shelves upon shelves of this traditional Japanese alcohol are aged. A setting that feels like it was plucked from an adventure film—think Indiana Jones—these stalactite-spiked caverns are a truly unique setting for aging awamori. The collection resembles a fantastical library, each awamori bottle with its own hand-written note to the future recipient.

But before descending into the awamori cave, you’ll first visit one of Okinawa’s 47 awamori distilleries, Matsufuji Distillery, which still uses the traditional small-batch method to make Okinawa’s famous alcohol. Previously used as a U.S. military aircraft hangar, the building was repurposed as a distillery. But that’s not all that makes Matsufuji Distillery unique—it’s also one of the only awamori companies with a woman founder!

After hearing all about the production of awamori and enjoying an awamori tasting with interpretation from your bilingual guide Junko, you’ll hear about Asamu Toyokawa who manages the awamori caves. It was her eccentric, entrepreneurial mother that came up with the idea to start aging awamori underground, using the awamori caves to promote local Okinawan culture in an area that was once only known for its U.S. military base.

Following the awamori cave visit, the Okinawa tour will continue with a tasting of tofuyo (a tofu dish that is fermented in awamori and aged in the very same caves). Sample it like a fine cheese, savoring the nutty flavor and richness. This tasting is followed by a meal of local Okinawan specialties. 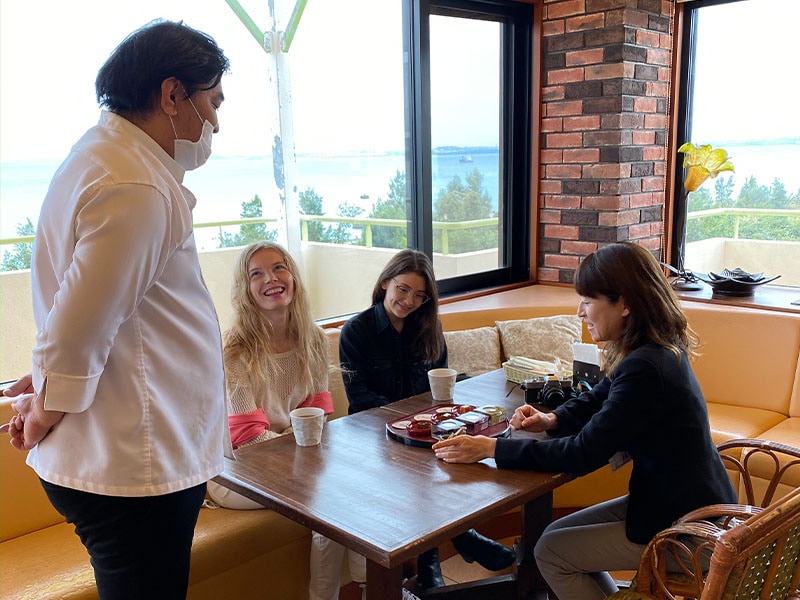